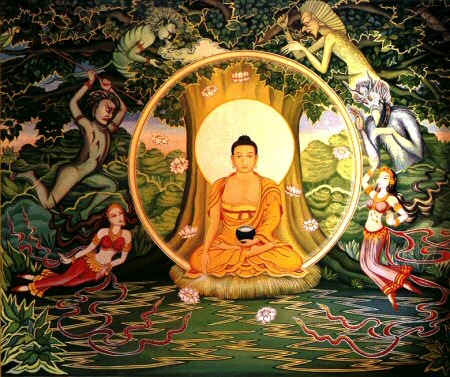 Now, I know that when Honey went to visit her guru Sri G. Ananda she was a very naughty girl as always (laughs) she was thinking “Who is this guru? What’s all this guruism all about?” And then the naughty girl, you know what she did? She went and touched his feet. What a devil, and everybody was horrified. “Oh you’re not allowed to do that”. But it was after that she had the experience of losing a lot of negativities. She had the experience of absorbing a tremendous amount of spiritual energy. She had the experience of seeing people’s aura, many miracles occurred which gave her the conviction, the inspiration to say “Yes, it works” and even though she lost a little bit of this ability and the psychic charge diminished because we’re all leaky buckets, each of your blockages is a hole whereby you lose a lot of psychic energy which you gain in your daily meditations. Even though she lost part of this ability the inner conviction remained within her, “There’s something to this spirituality business after all.” This inspiration caused her to look more widely and eventually to come here to us.

Each guru is a Buddhafield of energy. Each guru has different talents, different abilities. But it’s all founded upon the Buddhafield. The Buddhafield is the aura that spreads out from an enlightened person that causes the people that come to cast out their negativities. The ring pass knot. And we were talking about this ring pass knot in the stanzas of Dzyan yesterday, part of The Secret Doctrine of Madame Blavatsky, the “ring pass knot” that surrounds every enlightened person will not allow negative energies to enter into it. The student needs to have a certain purity before they can even come in. And if they’ve got a lot of negativity to get there, having got there, to stay there, because the Buddhafield casts out everything that is negative, it shakes up the blockages and the blockages go “Ah it’s not a good thing to stay here lad, I’d piss off if I were you”. They talk like that you know.

Now the Buddhafield of energy surrounds every guru. And from time to time when the student is ready a vast charge of energy can enter into the student which can encourage them, which can inspire them, which can make them certain there is something on the path, it can hold them to the path. And these things happened to me, every time I visited a guru or my guru, any guru, it didn’t matter, if the guy was enlightened, he showed me, I had the demonstration every time I went to see. But these experiences do not happen to everyone. After many long years of yoga and meditation from the age of 16, these things only started to happen to me in my 30’s, and more so as it started to get into my 40’s. Many long years of practice and meditation, because I didn’t start off in a very good state. It was a long hard road lad, it was. But I wanted to say, that slowly slowly slowly, by my own practice and later much faster, exponentially faster, when I had a link to my guru the process of evolution, the process of energy increase, the process of losing blockages proceeded so that when I did go to visit these gurus, I got immediate response, energy, encouragement, inspiration that perhaps I would have not have got when I’d gone there in the poor state when I was younger. I had to grow a little bit before I could receive that inspiration. Now when you come on an Energy Enhancement course you are entering into the Buddhafield and part of the talents of that I’ve been given, not only to teach these techniques that are so powerful but to give some sort of warming effect so that here in the Buddhafield the techniques are more powerful. Because everybody that comes on the Energy Enhancement course gets some experience. The Energy Enhancement course is not an intellectual course per se. You don’t have to be an Einstein to understand Energy Enhancement. It’s not rocket science. As you know, it’s the simplest possible thing in the world. But the only that makes it work, is the Buddhafield of energy that adds extra energy to give you the experiences. And I’m going to warn you that when you go away, it’s not going to be so easy. ..

Now you’ve had experiences with that haven’t you Vanessa? What happened when you came on the course 2 years ago? Well…you had experiences of seeing psychically, various things inside your being. I can’t remember all the details, everybody gets some experience, but when you left, you left in a much stronger and clearer state, we’d done a lot of good work on you, but you found it difficult to maintain your progress when you went away. You were much better when you left then when you came. But when you tried to maintain the program it was difficult. And I want to warn you about this….